Let's celebrate together PARADE's 40th anniversary on the occasion of Labour Day! 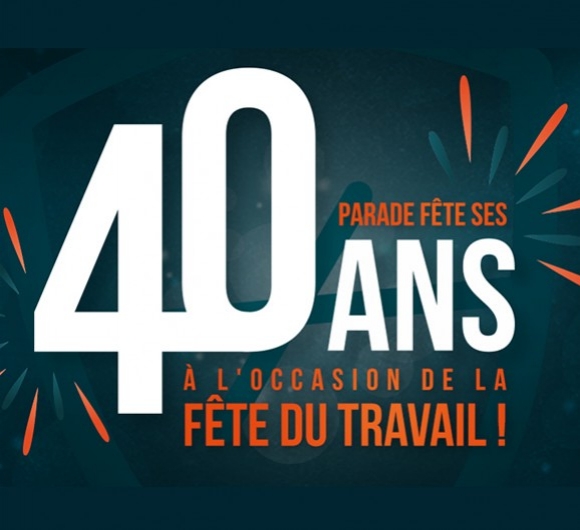 On 1 May, we are celebrating Labour Day, as well as the 40th anniversary of the PARADE brand which has been selling shoes and clothing for workers since 1978. It’s the perfect occasion for us to take a look back at the 40-year-old brand’s success story.

PARADE: A French brand founded in 1978

Parade began in 1978 in a France of colourful fashions and new materials for design, of high-speed trains and huge technological, human, artistic and philosophical breakthroughs.  It was an optimistic era, where people believed that progress takes humanity forward and where people were eager for change and willing to work hard to make it happen. Inspired by this environment, the chemical engineers at the Eram* Group developed a sole injection process to create shoes that were more flexible and durable. We haven’t stopped innovating since. From its creation in 1978, PARADE launched its first range of safety shoes and set up a production plant near Angers, France. Today, 100 employees work at PARADE’s production plant and innovation laboratory.

PARADE may be discreet, but that doesn’t mean innovation takes a back seat. In 40 years, PARADE has invented three different technologies that will leave an enduring mark on the history of footwear. These three inventions would never have seen the light of day without the special expertise of our teams.

In 1978, PARADE developed its PARAD’AIR technology, a cushioning system unlike any other in the world. This system is comprised of an enclosed air bubble injected directly in the sole to provide optimal cushioning from micro-shocks on impact. It was an innovation that would quickly win over workers. The technology reduces the risk of musculoskeletal disorders and established PARADE as the market leader in comfortable shoes. The system was later adopted by a well-known American trainer company which was instrumental in developing the technology’s global reputation in the 1980s.

In 1990, PARADE engineers developed a new technology to limit arch collapse caused by taking frequent small steps and poor posture. The technology was created as a sole that supports the foot and forces the body to adopt good posture, thereby reducing fatigue when standing. This technology was used by several brands in the leisure and fitness walking markets.

In early November 2016, during the Expoprotection trade fair in Paris, PARADE revealed a world first: thefirst shoe ever to include an artificial intelligence system built directly into the shoe (link to the PARADE Connect article). Two years of intense development with major multinational companies followed to adjust a few details to launch the product in the first half of 2019.

Following its strong successes, PARADE expanded its diversification process in 2016 by launching a textile range designed by and for workers. Each detail of every product is specially designed to make their lives easier: a jacket that follows every movement, trousers with a back rise, an anti-UV T-shirt, jackets designed to keep the wearer warm.

PARADE reflects the best of two worlds: the bold approach of the 1970s combined with a predilection for modern design. All of our models are carefully crafted to be stylish, comfortable and ergonomic.

Our iconic designs include:

The design of Parade products is generally characterised by very modern lines, camel-coloured leathers and prints that are bang on trend. Each detail is specially considered to protect and appeal to users.

40 YEARS OF A PEOPLE-CENTRED APPROACH

Over the past 40 years, PARADE has worked hard to keep its operations firmly anchored in France’s Maine-et-Loire region. Employee well-being and employability have always been among our primary concerns. This is why PARADE has been able to transmit its footwear expertise across the generations, and especially through its footwear school, which it launched in 2014. The recognised training offered here is open to job seekers. PARADE also cares about its customer and user needs. Each new product developed relies on a design method where our product managers use product tests, applications and experiments in conjunction with a broad user panel.

These past successful 40 years are the result of our hard work, expertise and passion for our products. But this success would not have been possible without you, our customers and users. We innovate every single day to protect you and help you achieve your greatest accomplishments. These 40 years are just the beginning of a beautiful story that we plan to keep writing together for decades to come.

*Parade is a subsidiary of the Eram Group that sells footwear and clothing for workers.